The 38mm Speedmaster made its debut in 2017, exactly 60 years after the introduction of the first Speedmaster in Omega’s 1957 trilogy of Master instrument watches. For starters, the size of this watch is absolutely perfect. After all, it is a sports watch and making the Speedmaster any smaller would cancel the personality of the watch. Like the Speedmaster that landed on the Moon (ST 105.012), the case construction of this model features the bevelled and twisted lugs that would become the hallmark lyre lugs. If you are interested in learning how the Speedmaster became the Moonwatch, you might find this article helpful. 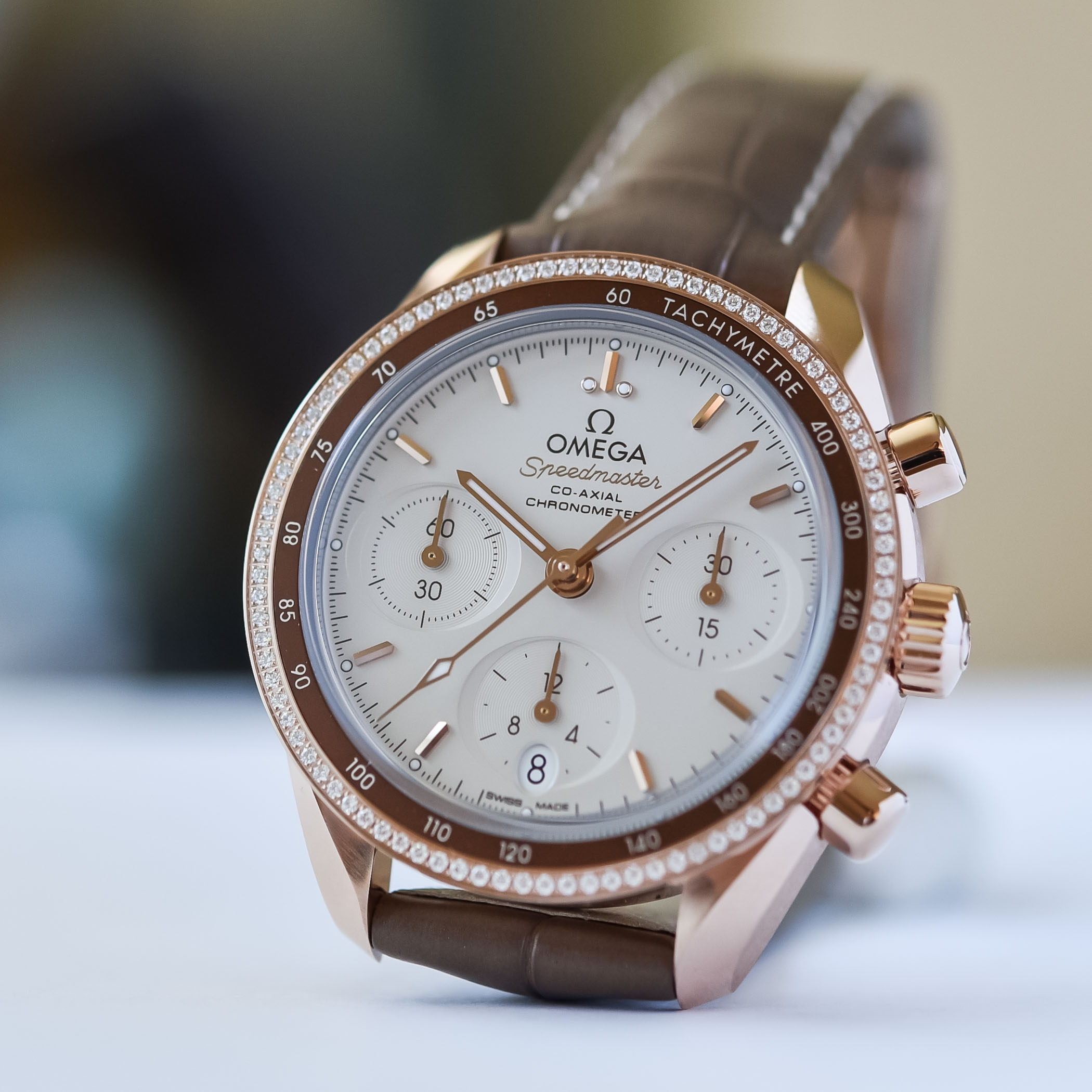 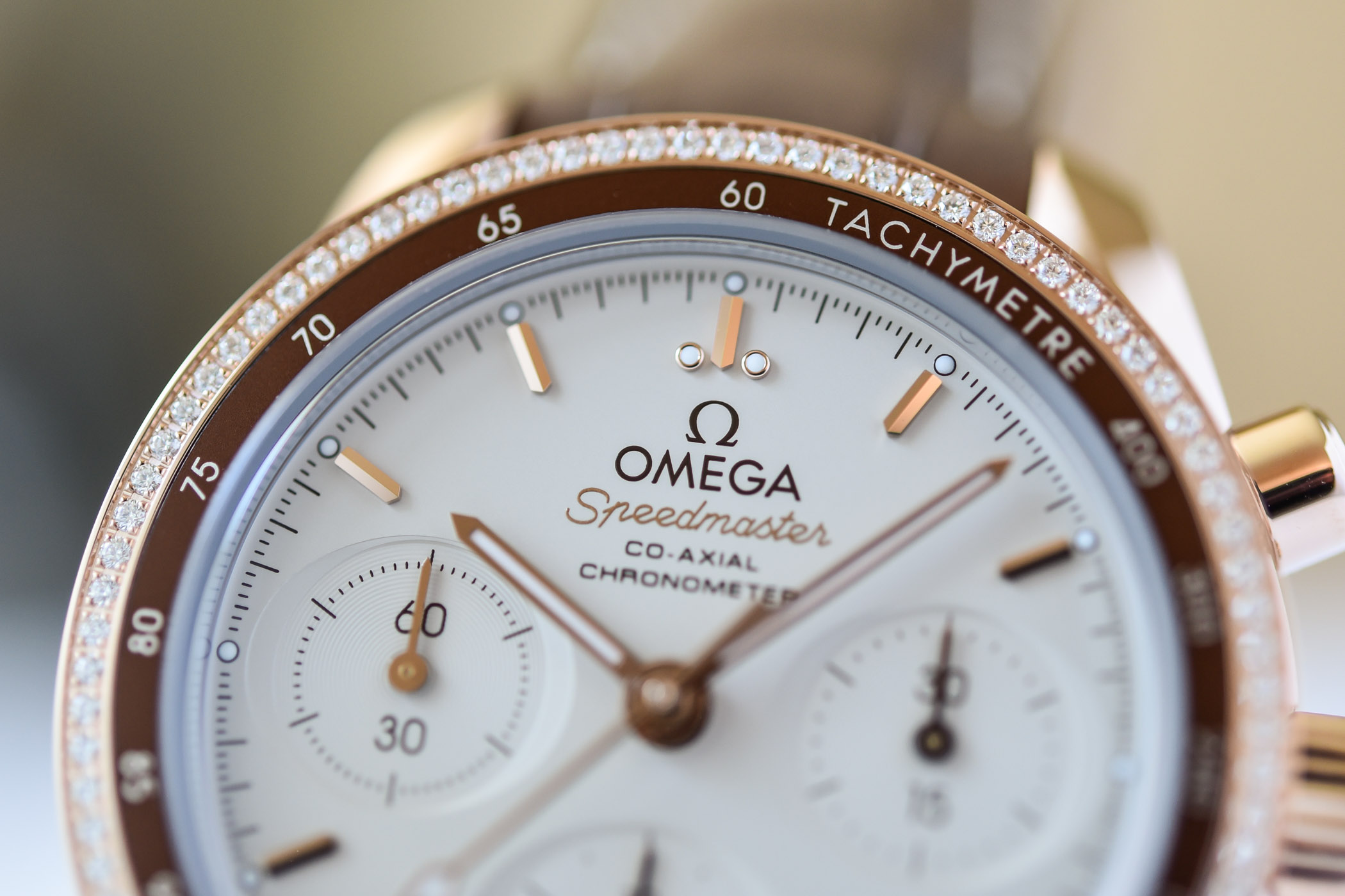 One thing you might have spotted is that the tachymetre scale on this watch ranges from 60 to 400 whereas most Speedmasters depict the range from 60 to 500 and the accent on the first è (tachymètre) and the white markings have been dropped. Obviously the incorporation of diamonds on the bezel meant that the tachymetre scale had to be thinner. However, even the models in this 38mm family without diamonds feature a slimmer aluminium scale although these feature a peripheral bezel with incisions on the numbers and markings. The protective buttresses on either side of the pushers found on many Speedmasters is still featured here but in a much slimmer way. This gives the watch a more elegant, almost symmetrical design.

The solid 18k gold case is crafted from Sedna, Omega’s proprietary gold alloy. With its blend of 75% gold, copper and palladium, the unique reddish colour is extremely attractive. The warm reddish gold looks very good indeed with the coffee-coloured tachymetre scale and the creamy dial and there’s that reassuring feeling of weight that only gold can impart. The reverse side of the watch is sealed and decorated with a large Seahorse medallion, an emblem of the Seamaster family to which the Speedmaster originally belonged. There is also an engraving alluding to the 100m water-resistance of the watch, a gold hallmark and the words ‘column-wheel’ and ‘Si14’ referring to the type of chronograph and the silicon technology in the movement.

The dial is a uniform creamy colour and this particular combination of a creamy dial and coffee coloured tachymetre scale explains the ‘cappuccino’ nickname of the watch. One of the salient features of the 38mm family is the shape of the three sub-dials. Instead of being round, the three counters are oval and slightly recessed to reveal a snailed background with the pertinent markings (running seconds at 9, 30-minute elapsed times at 3 and 12-hour elapsed times at 6 o’clock). To match the red gold case and underscore the luxurious character of the watch, the hands and the applied indices are all crafted in Sedna gold. The finishes throughout are excellent, just look at the sharp faceted and polished hour markers, for example. As a luxury sports watch, luminescence is mandatory and the central hands and dots on the external periphery of the hour markers are all treated with white Super-LumiNova. 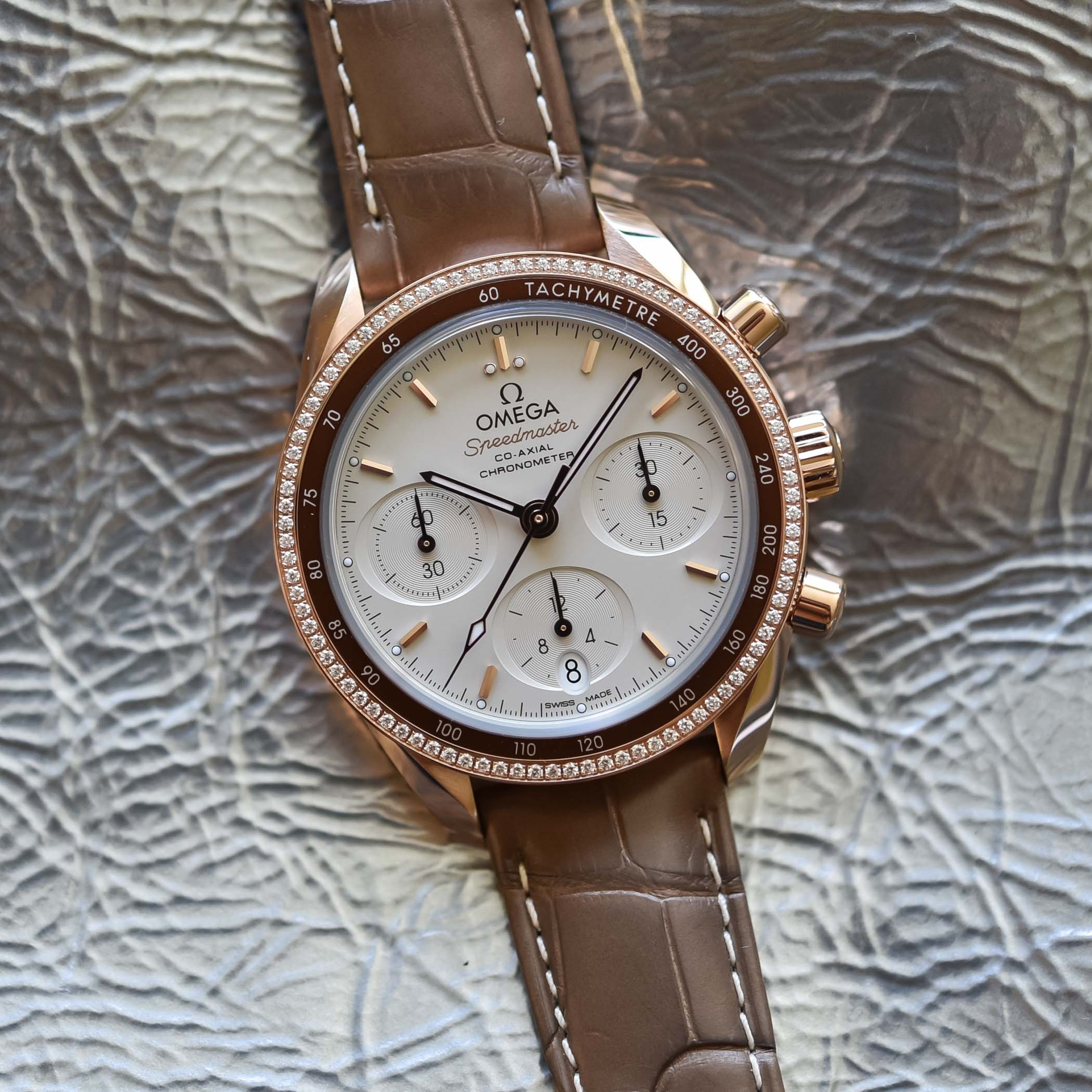 There is a date window inserted inside the 12-hour counter at 6 o’clock. Also shaped like an oval but placed vertically, the date window extends beyond the horizontal oval confines of the counter and has a white background. The dial is protected by a scratch-resistant sapphire crystal with anti-reflective treatment on both sides. No matter how historically ‘accurate’ a Hesalite crystal might be, the truth is that Hesalite scratches easily although it can be polished. Better keep this for the more hardcore Moonwatch versions.

Hidden under the sealed caseback with the seahorse is Omega’s in-house automatic chronograph movement. Calibre 3339, based on the Piguet 1285, is equipped with a column-wheel mechanism, a patented Co-Axial escapement and a silicon balance spring the watch is officially certified as a chronometer and offers a solid 52h power reserve. 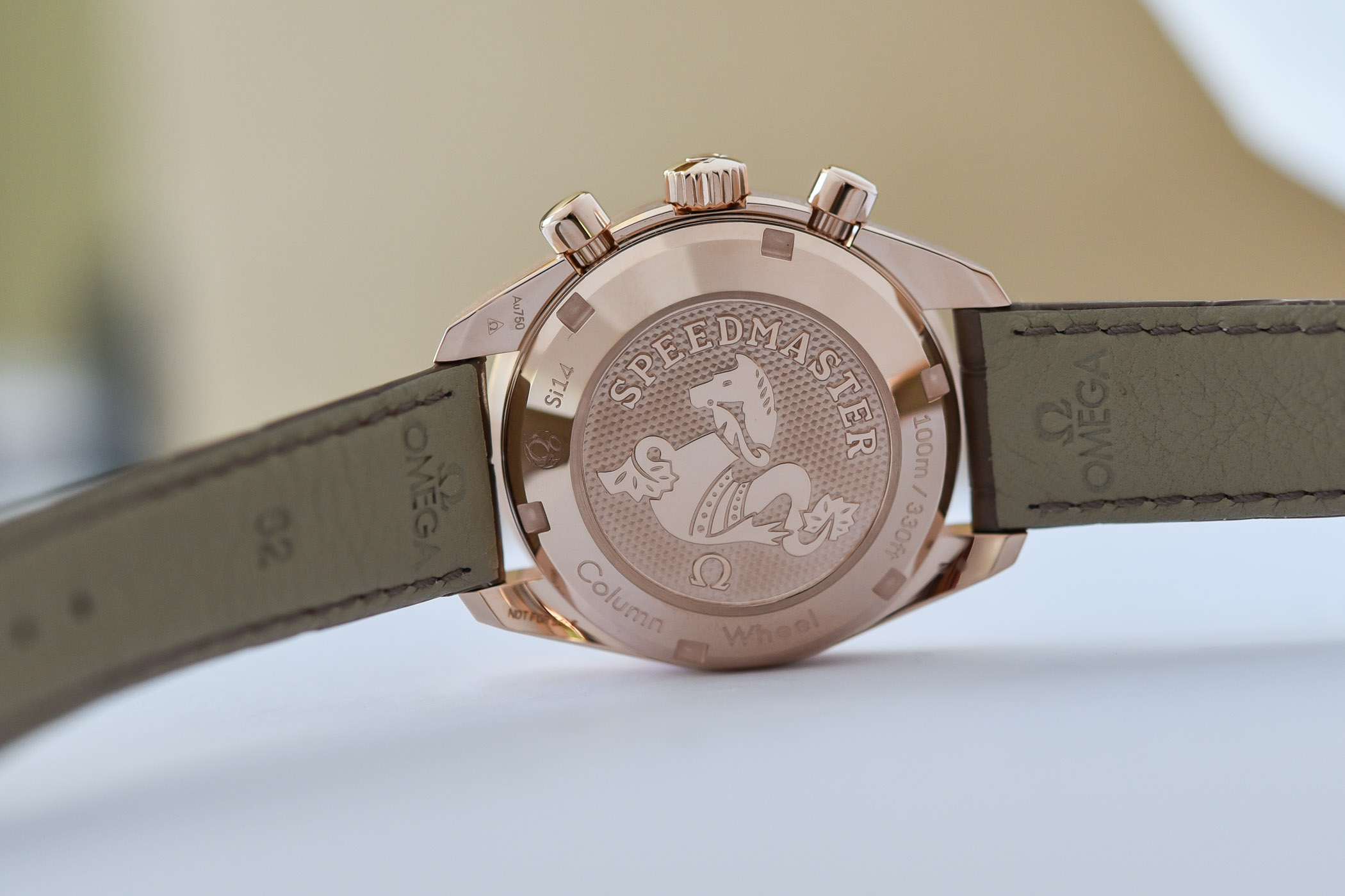